Multi-TTY Emacs on Gentoo and Ubuntu

(Historical note Sep 2008: The 'ec' script below is no longer (or shortly will not be) required, as there is now a patch that enables emacs as a frameless daemon)

(Historical note May 2008: This post is now over a year old. Multi-TTY Emacs is now part of the main Emacs CVS tree. Most of this post is still applicable, but the build instructions are very much out of date and for the most part are unnecessary as the multi-tty patch has now made it into most distros. It should just be an 'apt-get install emacs-snapshot' away)

Multi-TTY Emacs is one of the most useful peices of software I've seen in a long time. Emacsclient, the underlying interface for multi-tty, has been around for a while. It allows someone to connect to a long running Emacs session and it avoids the long startup time Emacs usually has. However, it only works in a graphical environment. Multi-TTY Emacs allows us to do the same from either a graphical environment or from a simple terminal (tty).

Here's a typical use case: I'm at home and I'm using Emacs from within X-windows. I'm using the wonderful IRC client, ERC, and asking a question in #python, #emacs, #gentoo etc. but no one seems to be paying any attention and no one is answering my question right away. Oh well, it's time for me to head off to class or work. I leave Emacs running at home but since I forgot to enable chat logs, it's rather difficult for me to connect remotely and find out if anyone has responded to my question. With Multi-TTY, I can ssh into my home computer and bring up Emacs in a text console and check my ERC buffer even though I originally started Emacs graphically from X-Windows. Neat. 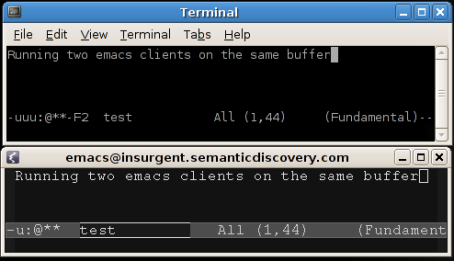 You can also see a video of it in action

Multi-TTY is contained in the CVS version (23) of Emacs. Version 23 is still a (tiny) bit rough around the edges, so don't blame me if while using it it deletes all your files and destroys your life in general. It won't, but caveat emptor. I am now running multi-tty on Gentoo and Ubuntu Feisty Fawn. Here's how:

On my laptop I run Gentoo Linux. Getting the latest version of Emacs on Gentoo was a breeze! :

Ubuntu was much more difficult to setup correctly because the repositories don't have the CVS version yet (emacs-snapshot is 22). So, I've compiled it from source myself and once I clean up my instructions I will publish a HOWTO as well as my .deb package.

Connecting to an already running emacs session is quite easy:

I found some excellent tips from sness.net for making this even easier. Here are my variations on his methods:

Make a new file somewhere in your path called preload_emacs:

Running preload_emacs -s ryan will now create an emacs server named 'ryan'. It loaded emacs in a screen session so that it will be able to be a long running process (Emacs apparently cannot run without an interface, hence we run it in a screen session to hide it away out of sight.)

To connect, we run emacsclient -c -s ryan. Typing plain old emacs here will load an entirely new Emacs session, which isn't really what we want. To make it a bit easier I created a shell script called "ec" that will load an emacsclient with these settings automatically:

Now when I type ec it will automatically attempt to connect to an already running emacs server named ryan. If it is not running, it will transparently create the server and then connect to it.

If you make "ec" your system's default editor, you'll now be able to use a lightning quick version of emacs for all your editing needs!