Ron Paul on the Dollar, Gold, and Oil

Everyone that drives a car knows that gasoline has gotten a lot more expensive over the last few years. But very few people seem to correctly understand why this is. Ron Paul, in his latest debate appearance, laid it out quite plainly, but it takes keen and willing ears to fully appreciate it:

The value of oil hasn't changed at all -- instead, the value of our dollar has tanked. The value of oil, relative to gold, has sat unchanged since 2000 (and even well before that). This means that if you got your paycheck in gold instead of dollars you'd still be paying the same price for gas as you were a decade ago.

The gas prices are not the fault of greedy capitalists. No gas company is "gouging" you. On the contrary, seemingly high gas prices are not due to any free market force at all, but rather due to the fascist cooperation of a complacent, apathetic, congress and the Federal Reserve. Our government has an insatiable appetite to print money out of thin air to support a massive military industrial complex as well as a socialist, redistributionist, welfare state. This monstrously inflates the money supply -- robbing the value of your dollar.

I decided to prove this for myself, that the golden price of oil is relatively stable. I downloaded historical gold spot prices, as well as historical crude oil prices. Using a bit of Python and matplotlib, I produced the following graph: 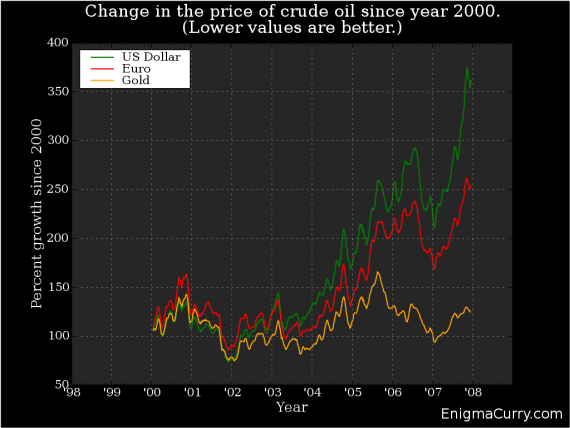 I'm not an economist, so I was fairly pleased when I saw that what I came up with correlated fairly well with the graph that the Wall Street Journal published. This graph shows that oil costs 3.5 times as many dollars as it did in 2000, and yet the oil price in gold has barely changed at all in the past eight years.

Everyone should be putting their money into an account with interest of some kind, and not just letting their money sit around uninvested. But at the rate that the dollar is losing its value, even "high" interest investments aren't paying out faster than the current rate of inflation (and as the above graph shows, that inflation is a lot more than the 3% the government would tell you). If we simply legalized alternative, market based currencies (as opposed to raiding and plundering them), we could have much larger gains on our investments as well as not losing any value on any money left uninvested.

This issue has been the core of Dr. Paul's career since the 1960's. It has taken the American people a very long time to wake up to this issue, and so it is an immense credit to his character that he has shown an undying vigilance, these many years, to the pursuit of liberty. I too, have hope for America.

(If anyone is interested, here is the python code (as well as the data files) used for the graph. )